With Biden, we my get a revisit for some sort of health care act.  In 2010, the Democrats had the Presidency and Congress, and instead of reaching across the aisle as they recommend that the Republicans do when the have the majority, they made their own plan, to the exclusion of any consideration of alternate plans or views and capped their disdain of clarifying questions with House Speaker Rep.  Pelosi’s quote, “We need to pass the bill (blindly) to find out what’s in it.”

Naturally, this led to the usual liberal activity of anything they do “in the name of” seldom reflecting the thing they claim to be helping.  Plus, it was called Obamacare, not the Affordable Care Act (though Romney had a remarkably similar plan), so if you opposed it, you were a racist.  Of course, Congress exempted itself from the plan.  They knew what a mess it was.  If it was about a fair, helpful plan, then why the exemption?  Then they promised the unions exemption for their support.  Once it passed with union support, the unions found out that they weren’t going to be exempt after all. i  It’s not the first time the unions or other groups who support Democrats were used and discarded.  If it was such a good deal for the working class, why the exemptions? Because even the authors and supporters of the ACA knew it was a bad deal.  Labor found out the hard way, when worker hours set by companies large enough to be under the insurance mandate were slashed, impacting the family feeding income of such jobs. ii  It also had a major detrimental impact on many labor negotiations.  Forward thinking labor leaders knew to lock in health benefits as part of earnings before the deluge hit, and those gains, as well as the keystone forty hour full time week, found themselves under attack.  The Teamsters’ strike against the UPS surge in lower benefit part-time staffing was enough of a bear to handle in 1997, iii the ACA made that job much harder.iv  As I said, be wary of having the liberals on your side.

Then finally, there is the lie that it was all about compassion.  Sen.  Daschle’s book Critical outlines his ideas about rationing care, and he was the Secretary of Health. v  Obama’s comments to a woman whose elderly mother got care, that she should’ve been counseled to take painkillers and forego surgery, vi shows where he was. vii  And now, Dr.  Ezekiel Emanuel, Biden’s choice for his COVID-19 panel, and critical architect of the 2010 ACA bill, says effectively that life past age 75 is worthless. viii  So everything old is new again, and if you think this disdain is just for the elderly…

So, health care.  How to cost average it so no one must be financially ruined? When 530,000 people declare bankruptcy (66.5% of bankruptcies) annually due to medical costs, and 250,000 GoFundMe campaigns, as well as countless local spaghetti or soup dinners and raffles, are held to cover such bills, what is that? ix  A Huffington Post article titled “Why US Health Care Is Obscenely Expensive, in 12 Charts” highlights the mess. x  I offer a couple of graphs to show what we deal with:

What you see is not a health care cost crisis, it is a health care administration cost crisis.  Both the number and salary of administrators rise around 3000% from 1970-2010; doctors’ numbers and salaries rise roughly 200%.   Do doctors make a lot of money?  I don’t begrudge them a dime, and wish the front-line nurses, CNAs, and others were better compensated.  They work many hours, pay down a lot of training debt, are subject to liability for honest mistakes as well as malpractice, and have a daily responsibility for their patients that we on the outside do not know.  And we have wonderful advances like MRIs, CAT scans, drugs that target cancer and other diseases while damaging the body much less and increase survival and quality of life, which are worth the cost.  Why do we have so many health care workers from other countries?  Because back home, their systems do not pay them what they are worth.

Most importantly, what is your take?  In a best scenario, what would be a good solution to all of this? A single national co-op where we figure out what the true cost is, then divide it per person?

Should we have comprehensive, or simply major medical where one buys supplemental insurance for minor needs.  But then, what is the cutoff, and where?

And how to, if not prevent, at least box in and reduce the impact of leftists’ use of the system to back door their various agendas.  They already have doctors asking patients if they own guns, wear a helmet while biking, and other items, then put that into their permanent medical record. xi  And they already have a punitive, 2 tiered monthly ACA fee for smokers.  Will they also move to saying you cannot go skydiving or motorcycling because of medical costs?  Never mind the social engineering agenda.  As Illinois proves, no one votes against Santa Claus.  And whenever one argues for how to administer health care, we already saw the TV commercial where the Republican Paul Ryan hypothetically takes grandma in her wheelchair to the edge of the cliff and dumps her over, xii though Obama in his own words said to do the same with his aforementioned pain killer remark.  So, if you argue for responsible fiscal oversight, the party of rationing and raising your buy-in based on your personal decisions will club you to death politically.

I saved my humble opinions for last.  We have local government managed firefighters because when fire-fighting was done by private companies, you had situations where different companies showed up to a fire, then fist fought to see who got the job while the building burned. xiii  Or if it was contracted out to a policy holder who had a medallion affixed to the building, and a neighboring building went up, they just might stand by to simply ensure that it didn’t extend to the policy holder’s. xiv  And as we see in Hobart, funding and staffing become a political football.  But we have universal coverage, and a humble modular house gets the same care as a larger unit, regardless of it was something unavoidable as a lightning strike, or a fire in a wall from old wiring, or if some fool tried to barbecue in the bathtub. xv

And there you go.  Will health care become a tool to make your decisions for you, your new overprotective mother whose apron strings you will never be able to cut?  I do not care if you smoke a cigar while motorcycling bare headed in a tank top and cargo shorts to your next skydiving Saturday to do 10 jumps, you should not have to pay huge premiums or have your care restricted.  I’m not to decide if you have 5 wonderful children or one rotten one or need to be fixed after X number.  Or if you are in your 80s fit as Jack LaLanne was at that age, or not, then have the health care administration tell you, as the NHS says in Britain, “You had your turn.” xvi

But back to the positive.  Our economy competes globally against that of countries where health care is not a cost of business.  Take that off the ledger, and you can have a compensated workforce while competing better globally.  You also may have fewer walking wounded working at 70% or so because they cannot afford to get repaired.  Or have fewer people wait until their problems go from an initial symptom to a much more critical problem that may leave them dead or disabled (costing so much more in the meantime) because they could not afford initial care.  Small businesses and independent workers can have the safety net of health care not being a Sword of Damocles hanging over their heads, ready to destroy them at whim.  I see a better managed system being a win for big and small business, the poor, the self-employed, and the working class alike.

Will people abuse the system? Those looking to do that have already found ways to game the system.  SSI has a huge problem, xvii enough to make life hard for those with truly qualifying issues to jump through years of hoops to prove their claim because of this.  Do people have bad habits that are costly? We all have.  I eat too many carbohydrates, and the nannies might want to manage my behavior, but if one points out the medical costs of living a sodomy lifestyle, invoking numbers because I Believe in Science, xviii Science’s opinion, not mine, the same ones who would run my life will say, “How dare you butt the government into the way I live my life?”  If you want to win the drug war and stop people from abusing recreational substances, something with staggering costs in health care and lost productivity, look to states from Michigan to Oregon to see how far that will go.  Laws for you, not for me.  Your behavior should be curtailed by the health system; mine celebrated and promoted.

Taiwan did a quality job of working on its system by looking worldwide, highlighting the good while thinking of how to curb the bad.  An excellent PBS Frontline show called Sick Around the World covers it well, xix and is what raised my consciousness on this in the first place.  Can we have a good system that contains costs, pays it workers well enough so people go to school to become health care workers and feed their families, so we avoid rationing, and have it been fair?  Can?  Sure.  Will?  The USA pulled off the Panama Canal, the Hoover Dam, and the Space Program.   It also cannot run Amtrak to save its life.  But here is our current system, xx and remember the overhead that I showed above. 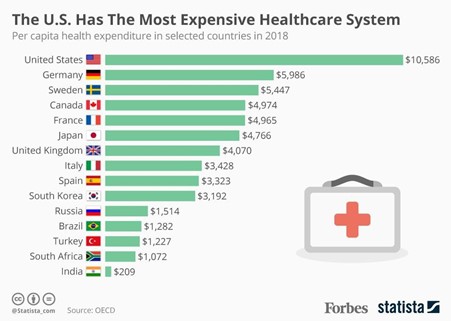